Imagine you are me, only for a moment. You’ve just had a long day of being a sophomore in high school and you just want to sit down, do your homework and go tobed. However, when you walk in the door, Dad has a surprise. Walking into the kitchen was like stepping into one of Gordon Ramsey’s restaurants. Dad was busy cooking the ground beef that was the main ingredient while my youngest sister tried her hand at mixing all the spices together. This was always their thing, cooking, with half my family expecting the youngest of us to become a chef someday. My other sister, the middle of us three, would come in and start talking about how she needed a ride to dance class this Saturday, Dad would launch into a rant about how she already had dance four times this week, a professional in the making. Meanwhile, our old golden retriever would sit at the corner of the counter and beg for any scraps that got dropped from the melee. This was chaos, but it was my chaos. My family’s forte has always been finding peace in the mess.

Dad started making chili when I was very young. He’d always been a decent cook, but never anything noteworthy, until he decided to make chili for the family. Unfortunately for us, it took a whole night to sit in the crockpot before we could eat it. The anticipation would build the next day as the whole house began to smell warm and delicious. Chili was very simple to ma 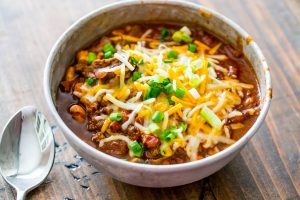 ke in large batches, making it our leftover meal for the next week or so. My father’s chili truly is the most comforting and versatile dish that I have ever had.

When I ask my dad, what inspired him to start making chili for the family, he always responds a little differently, but it usually begins with the Food Network. My grandmother watched the Food Network constantly at her house, I’ve probably seen every show ever aired on the channel for the last 10 years. Dad had always wanted to try his hand at cooking something like that, something he could really put his own spin on. Chili seemed to be the perfect dish, crowd pleasing and relatively easy to make. He started off with recipes and began to add special ingredients however and whenever he wanted to.

One failed attempt at making the chili “his own” was the great Mexican Chili disaster of 2013. Mexican Mess Monday was a tradition in my house, almost every week we were at my father’s house, we would go to the store and get taco, enchilada and fajita making kits and go wild with anything we wanted to do. So, one Sunday night, dad 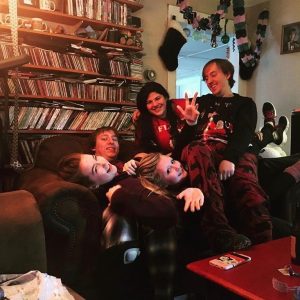 decided that he was going to put a “Mexican twist” on chili for the next day’s disaster. He got all the makings of tacos, minus the shellsand went to work. He mixed in refried beans instead of kidney beans, added taco seasoning into the ground beef and decided to add half a bottle of hot sauce to the mix. That, right there, is where he went horribly wrong. At this point, my grandfather had passed away and my grandmother was living with us. Some important backstory on her, she does not like spicy food, nor do I. Dad failed to inform us of the fact that he’d added a half a bottle of Frank’s Red Hot into his chili, thinking that it wouldn’t be as spicy once it was cooked in with everything else. Grandma and I both took very large servings, only to find our mouths on fire as we drank about a gallon of water each. No new attempt at Mexican Chili has been made, to this day.

Finally, dad found something that worked. When he first told me, I was quite upset, as I thought he was going to ruin my favorite meal. Pumpkin. I’ve always hated pumpkin; pumpkin pie, pumpkin seed, the guts that get pulled out when carving them, everything about it. According to my father, if you add pumpkin paste, very similar to the filling ofpumpkin pie, it makes the chili creamier and you can’t even taste the difference. Despite my objections, my father tried it and I was hooked after the first bite. It made the already bold and savory taste of the chili into a creamy, smooth sensation. Though the chili was amazing, nothing compared to the times we had while we ate it.

There was often nothing better than my dad’s chili on a cold fall/winter night. We would all grab a bowl and migrate into the living room, putting on the cop show du jour, settling in for an hour or two at a time. These were the best parts of the season, my whole family together watching cop shows, yel 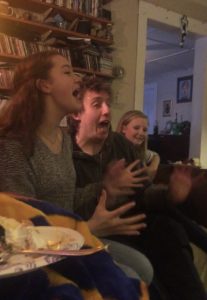 ling out our theories on who the murder was or who was the dirty cop. These are my favorite memories before I moved to college, they were always good nights. I always felt safe and happy, with the wood stove roaring and crackling across the room as my sisters and I fought over the “comfy corner” of our sectional couch. Grandma always fell asleep, meaning someone had to sit next to her to grab her bowl and make sure it didn’t fall, or even worse, the dog getting it. The nights we had chili were great, but nothing compared to the mess we would make out of it in the days to come.

The next morning, dad would always leave the crockpot going when he left for work, so anyone who wanted chili for lunch could easily scoop it out, or package it up and keep it in the fridge for that night. The night after chili comes chili dogs almost always. This meal often turned into multiple. Hot dogs with chili on top, sometimes burgers, occasionally my father would feel bold and make some frozen hash browns in the oven, adding those to the menu, always smothered in chili. Dad refers to this as his “mad genius moments”, because only a mad genius cold come up with the kind of stuff he does, or so he thinks.

My father’s chili has always been a unifying force in my house. No matter how bad our days were, we could always come together and find a common ground over our favorite homemade meal, the one I look forward to every time that I come home from school. From bringing everyone together for dinner to being a versatile snack and follow up dinner, my father’s chili is definitely my favorite meal to eat with my family. 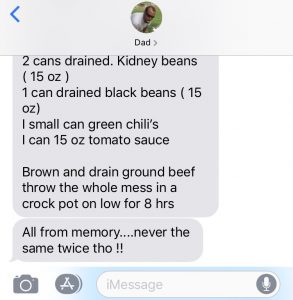